Today
A 40 percent chance of showers and thunderstorms, mainly before 5pm. Cloudy, then gradually becoming mostly sunny, with a high near 82. Breezy, with a northwest wind 13 to 15 mph, with gusts as high as 24 mph.
Tonight
Areas of smoke after midnight. Mostly clear, with a low around 55. North northeast wind 9 to 14 mph becoming south southwest in the evening.
Thursday
Areas of smoke after noon. Sunny, with a high near 90. West wind 7 to 11 mph becoming south in the afternoon. Winds could gust as high as 16 mph.
Weather forecast provided by weather.gov.
Sign In LinkSearch
Main Navigation

Your session will expire in 0 minutes. 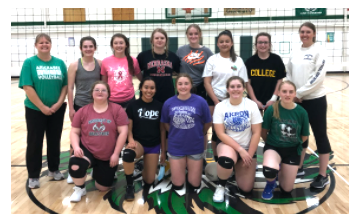 Junior High volleyball started the day after basketball ended. They have a busy schedule ahead of them. They are really happy that they get to have a volleyball season. Their first game was at Arickaree against Briggsdale - A girl scores were  ( 10-25, 25-22, 12-15). They also had a game on March 27th at Stratton and the score for the B-girls was ( 24-26, 25-15) and the score for the A girls was ( 13-25, 22-25). They have ten more opponents before their year of season tournament on Monday, April, 24 in Otis.